Beavers are one of the most important keystone species in North American ecosystems. There is a growing understanding by both the scientific community and the public of the profound influence that these incredible organisms have on the landscape. The science is sound, and the reasoning is clear: beavers are the “eco engineers” of the natural world. Many are beginning to see them as one of the many catalysts to solving the problem of anthropogenic (human) caused climate change.

However, is this idea of remedying watershed issues in a sort of 'collaboration' with beavers the way we should approach beaver conservation, and should we be promising the species will fix all the issues associated with human-caused watershed problems? Let us reconsider how we discuss beaver conservation, change the vernacular we use when educating the public, and give these animals the personal agency they innately have as members of the animal kingdom.

As is the case in most scientific endeavors, public perception and messaging are key to creating understanding and action. As educators and researchers, we need to put our best foot forward and purvey not only a clear message but one that creates healthy thought processes and conversations. It is apparent to those who work in wildlife that this inherent personification of animals can damage the comprehension of their natural history and place in natural ecosystems. Careful discussion of the human element and our perceived “job” of wildlife becomes a tricky subject. One of which is rot with potential misinformation. This potential misnomer is why it is paramount that we reconsider our messaging.

A simple substitution of vernacular, conceptualization, and attitudes towards beavers and their natural behavior could be vital to creating a well-rounded understanding of the natural processes of wildlife. Language shapes thought, thought shapes action, and when it comes to the media, action is translated in mass. So when we communicate our efforts to the public, let us closely consider the language we present. For instance, changing the message like giving beavers a “role” or “putting beavers to work” can be explained more accurately by attracting them to locations where they might be naturally successful. Rather than creating a “collaboration or partnership” with beavers, we are simply attempting to restore conditions needed for ecological success.

Next, we need to talk about our perspective. Forced perspective and personification of beavers have driven us to consider them through a humanistic lens. A priority must be placed on giving these animals their own agency and their own perspective in their place within this world. Simply stated: we must allow them to exist in their own space. This respect for these animals’ personal agency needs to be proliferated on a societal level, where we are no longer objectifying non-human animals as tools to be used at our discretion.

As a community, we have defaulted towards this innate personification of beavers and have unfailingly objectified beavers and the “ecosystem services they provide.” There is an issue here, as beavers are not beholden to the human-caused issues of our planet, and frequently, our language as researchers, writers, and presenters reflects this exact sentiment. This creates an unrealistic expectation of a species that requires its evolutionary predisposition and has no interest in the issues of humankind.

The language of “utilizing,” “partnering,” and “collaborating” with beavers has served as a vital bridge, connecting to a pathway of knowledge we all have been intentionally severed from. These tactics go seven generations back, not just two or three. The intentional severance from all Indigenous knowledge has provoked a one-to-one relationship with the natural world: “what can it do for the singular “I’?” has been the guiding question. A gentle and intentional reshaping of language to reconnect us with the origin of our knowledge of interspecies living, recognizing we are not at the “top”; human supremacy is a myth. For those of us who are “beaver believers,” this is incredibly important, to signal through language a path forward in our work, how we relate to one another, to cultivate and activate a gentle tidal wave that will influence our work, research, and relationship to one another and the natural world we live alongside and with.

The solution is unlikely to be found here in this publication, as these writings are exactly as presented: a discussion or at least a catalyst for one. As researchers, conservationists, and educators, we hold the unique and essential role of disseminating scientific information, distilling it down to a critical, digestible format. Nevertheless, we often forget our role in how we present that information, the language we use, and the conversations we invoke. The personification of beavers as a tool used in our mission to solve the world’s most significant problems simply will not do. We must find a better way to discuss beaver conservation.

Simply stated:
we must allow beavers to exist in their own space.

We offer this media style guide for consideration 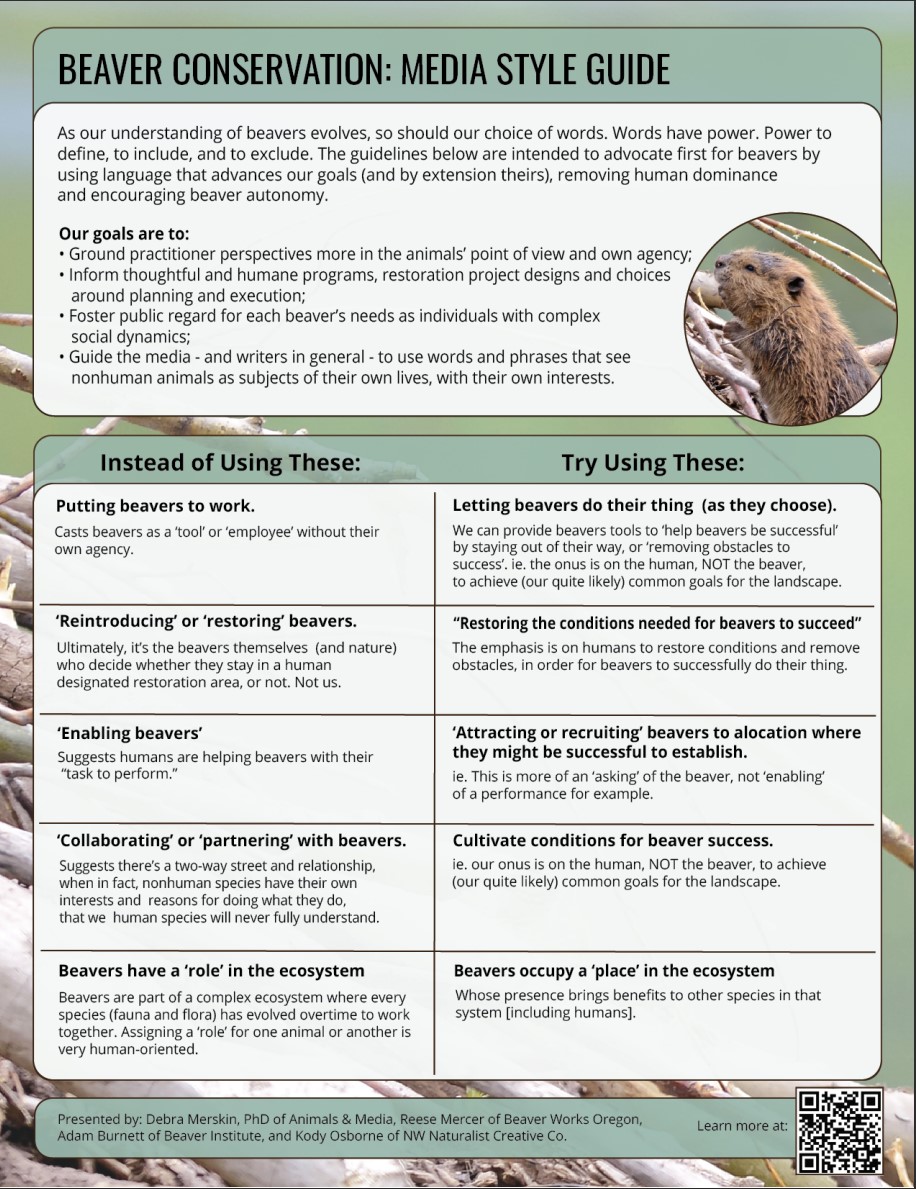