People and Beavers Join Forces in Restoration near Prineville

Two belted kingfishers flash blue wings above a beaver dam and angle into the trees shading Marks Creek. The birds’ ratcheting cries merge with the distant roar of an excavator dumping rocks in a dry creek bed upstream. The contrast could not be more jarring. The potential for transformation could not be more exciting.

I’ve come with Reese Mercer, program director of Beaver Works Oregon, to witness the 2020 restoration of a 3,000-foot-long stretch of Marks Creek on private land. If I had only hiked among the heavy equipment, rocky rubble, and juniper-log lined newly cut meanders in the hot sun, I would have had my doubts. How could this mess save a stream and bring back beavers?

The evidence is irrefutable in the 2006 restored stretch downstream, where kingfishers nab fish in cool pools created by beavers. In fact, at least 30 beaver dams and three lodges flourish along 1,400 feet of lush stream that’s hopping with frogs, swimming in fish, and buzzed by dragonflies. Likely, one to two established colonies of beavers thrive. Side-by-side comparisons of photos of this part of the creek in 2002 and today show an amazing shift from treeless cutbanks and shallow warm waters to forest-lined deep, cold meanders. 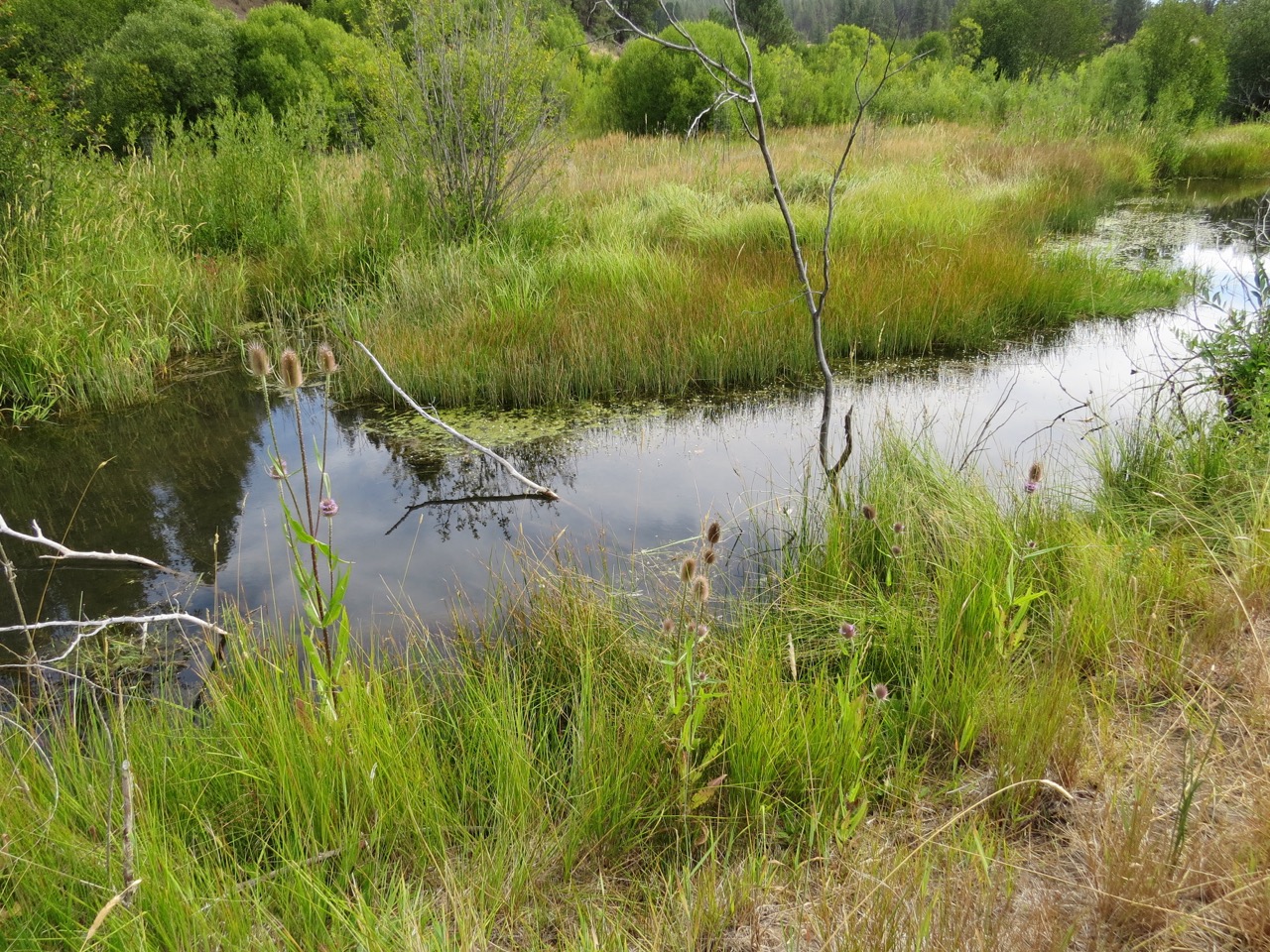 Deep pooling in August 2020, along downstream section of Marks Creek restored by Crooked River Watershed Council and the landowner in 2006

See the Restoration from Highway 26

You can see the restoration in progress along 3,000 feet of Marks Creek from Highway 26, going east from Prineville right before the Ochoco National Forest boundary. Marks Creek is a tributary of Ochoco Creek above the reservoir. The plan is to bring the water table back up, restore the natural hydrology and improve fish passage. While not designed for beavers specifically, they will play a mighty role.

When Reese and I step out of the car, we’re greeted by Mark Peterson, project manager for the Crooked River Watershed Council. Carrying a jug of water to stay hydrated in the intense sun, Mark wears a bright orange vest with full pockets, a ball cap and sunglasses. A fisheries biologist, he’s thrilled at the apparent destruction that is in reality—reconstruction with nature as a guide. It took four years of navigating the many permits, and this summer the project is rumbling ahead with the heavy machinery work to be finished by the  fall.

“Where is the water?” I ask. I’m dumbfounded by the bone-dry creek bed and scraggly sad willows here and there. Mark tells me it’s there—underground, and restoration will bring the stream back to the surface.

Magic? No—it’s hydrology science based on studying healthy creeks of the Ochocos. Beavers play integral roles as soon as they can move in, and in ways I had not considered before. Who would have thought that beaver dams trap sediment that in turn plugs the holes in the rocky alluvial fan streambed to help keep water from escaping underground? 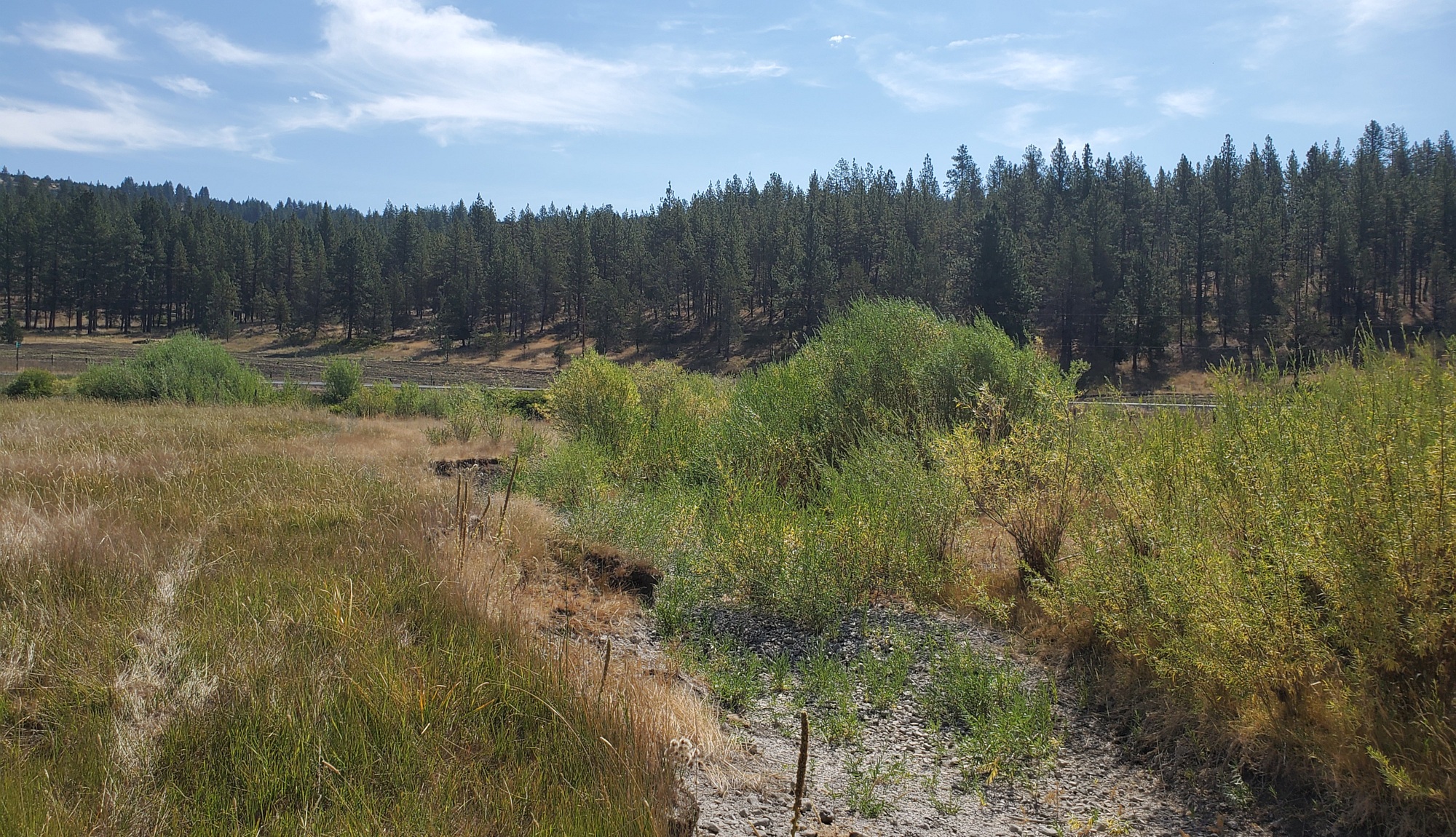 Landowner Tom Griepentrog is part of a family that owns separate parcels of Marks Creek. He’s taken time from running a tractor to meet us, and is joined by Greg Ontko, the experienced stream restoration contractor.

Normally, we’d shake hands, but it’s Covid-19 time and we give a friendly wave and stand apart to hear the story that begins with Tom’s grandparents who bought the cattle ranch in 1947. Wearing a straw hat to shade his blue eyes from the blazing sun, Tom tells me he grew up exploring the creek in the 1950s.

“For my grandparents, the creek was a source of water and that was it,” he says. “They didn’t worry too much about how much they grazed and denuded the banks, but back then there was also a lot more continuous flow.”

Things started to go downhill after major flooding in 1964 that led to the Army Corps of Engineers channelizing Marks Creek. “My grandpa went along with it, but afterwards the creek began to down cut and we lost the meadow recharge, ”said Tom, and that has continued to worsen with drought and less snowfall.

Yet, right above the private land on the Ochoco National Forest, a more natural Marks Creek runs year-round—narrow and cool, lined with trees and grasses, and enriched by the presence of beavers. There was hope—if only they could replicate those processes downstream.

After the death of Tom’s grandparents, the ranch went to four daughters who in turn passed their parcels on to family members. Tom’s piece is closest to the national forest. Below that, a cousin who lives far away has a stream section that has yet to be restored, and right below that is cousin Steve Lieser’s lush oasis with year round cool water—the inspiration for today’s project.

We’ve Done it Before…

Tom worked side by side with Steve starting in 2002—shoring up eroded banks with cut junipers, planting willows, fencing and partnering with the Crooked River Watershed Council and the Natural Resources Conservation Service (NRCS).

Now, 14 years after the completion, Tom looks forward to similar success on his place. The key to making that happen is the team we meet this day—landowner, biologist, hydrologist, and contractor.

Greg Ontko, the contractor, has turned his large machinery to restoring creeks for 20 years, and witnessed the return of water and recharged meadows, more wildlife, and better conditions for working ranches. He comes a family deeply rooted in the Ochocos and central Oregon. His father Gale Ontko wrote Thunder Over the Ochocos, a five-volume series on the history of the area.

I ask him what he thinks about beavers.  He considers, thumb in one pocket of his worn jeans and hand in the other. “I like them alright as long as they don’t flood too much of the meadows. They have to be managed.”

Thanking Greg and Tom for taking time in the heat to chat, Reese and I traipse after biologist Mark through the excavating on our way to Steve Lieser’s restored section. What first looks like a massive jumble of rock moving starts to make sense. The once shallow and wide channels are narrowed to six to eight feet across. Changes in elevation correspond to riffles and three to four feet deep pools. Cut juniper trees are shoring up streambanks until plants take root. The focus is on bringing up the water table. 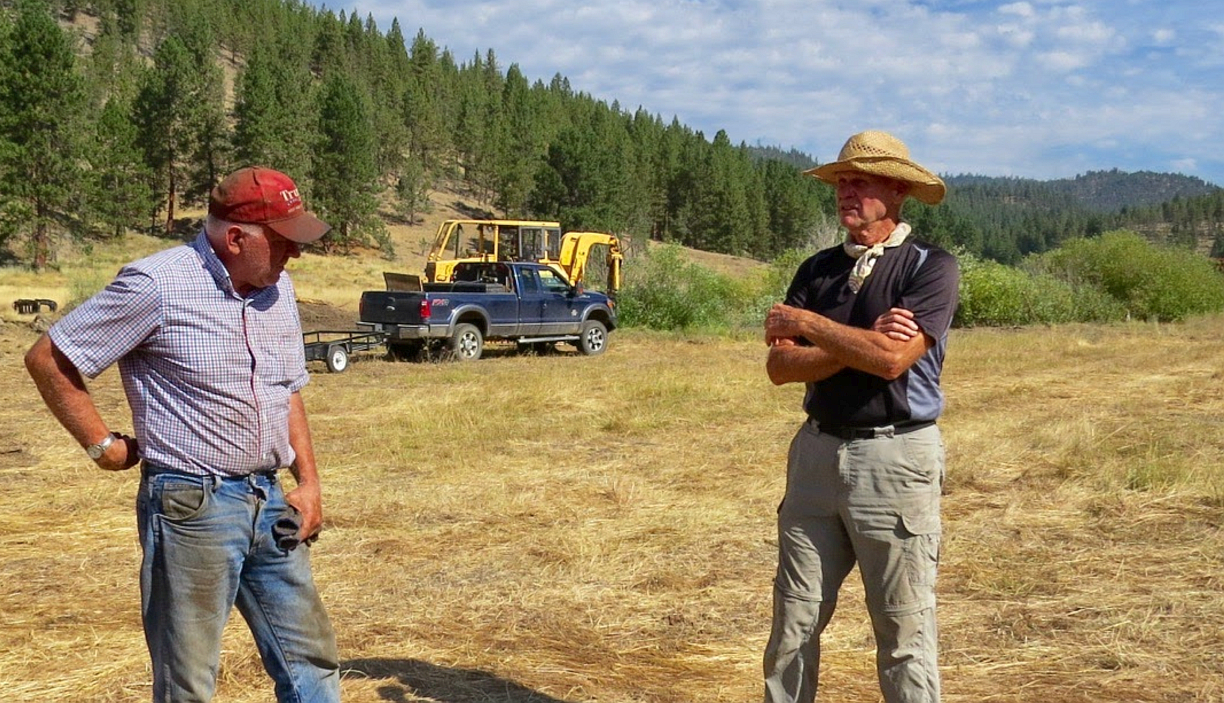 “Beavers are the cheapest way to restore streams,” Mark says, “but you have to invite them into good habitat first.” He points out that too often people jump in with tree-planting, when the stream channel is too damaged for that to work.

After all the reconfiguring on this alluvial fan and dry stream bed, the next steps will be fencing the corridor with at least a 20-30 foot buffer to protect the banks and new plants (fall planting of willows, cottonwoods, aspens and alders). They will keep livestock out for the first ten years, and funnel them into certain places to drink.

“For beavers to return, it’s a big circle,” he says. “You can’t sustain beaver without the vegetation to support them, and you need beaver dams to catch the sediment from the spring runoff.” 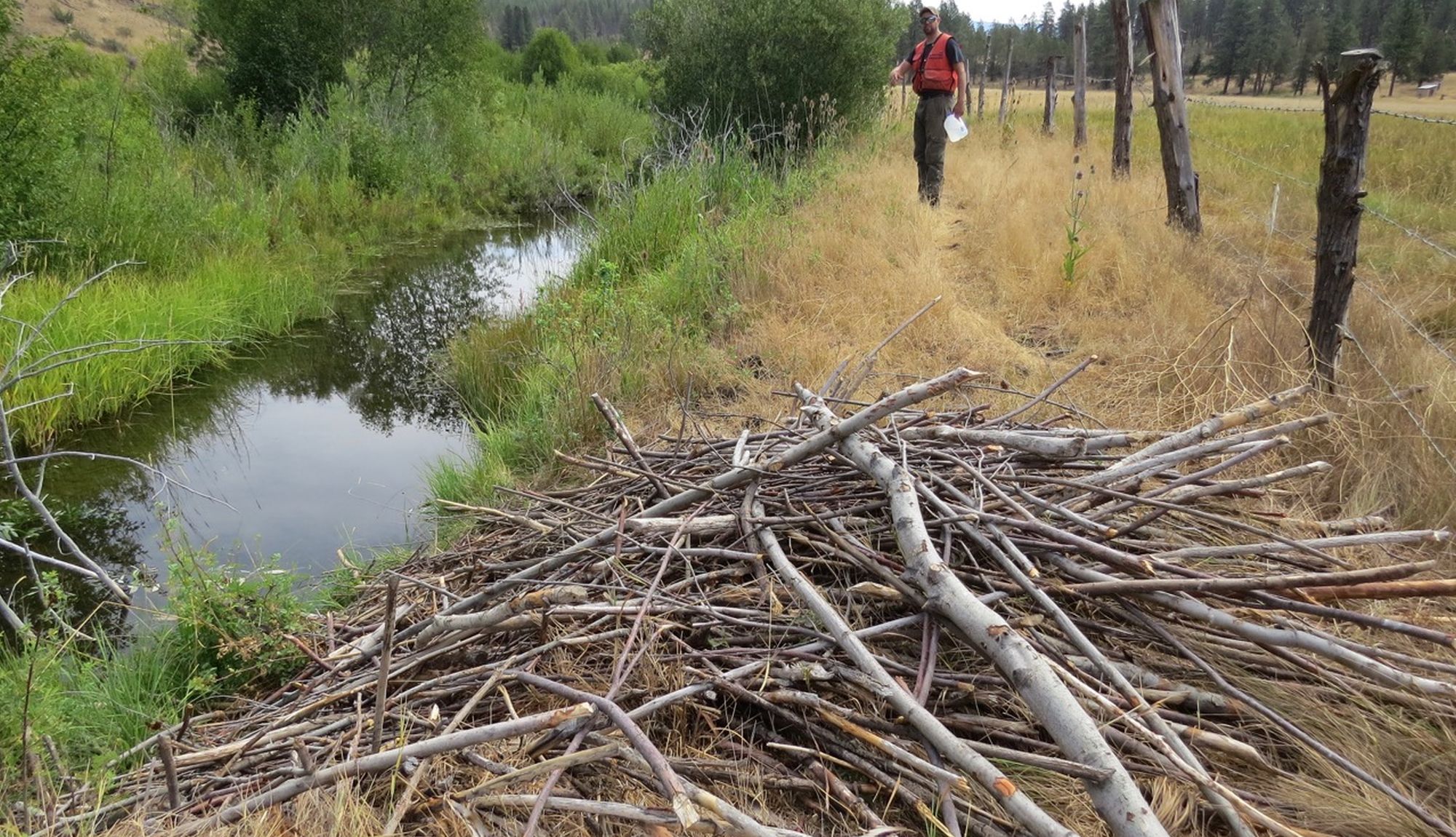 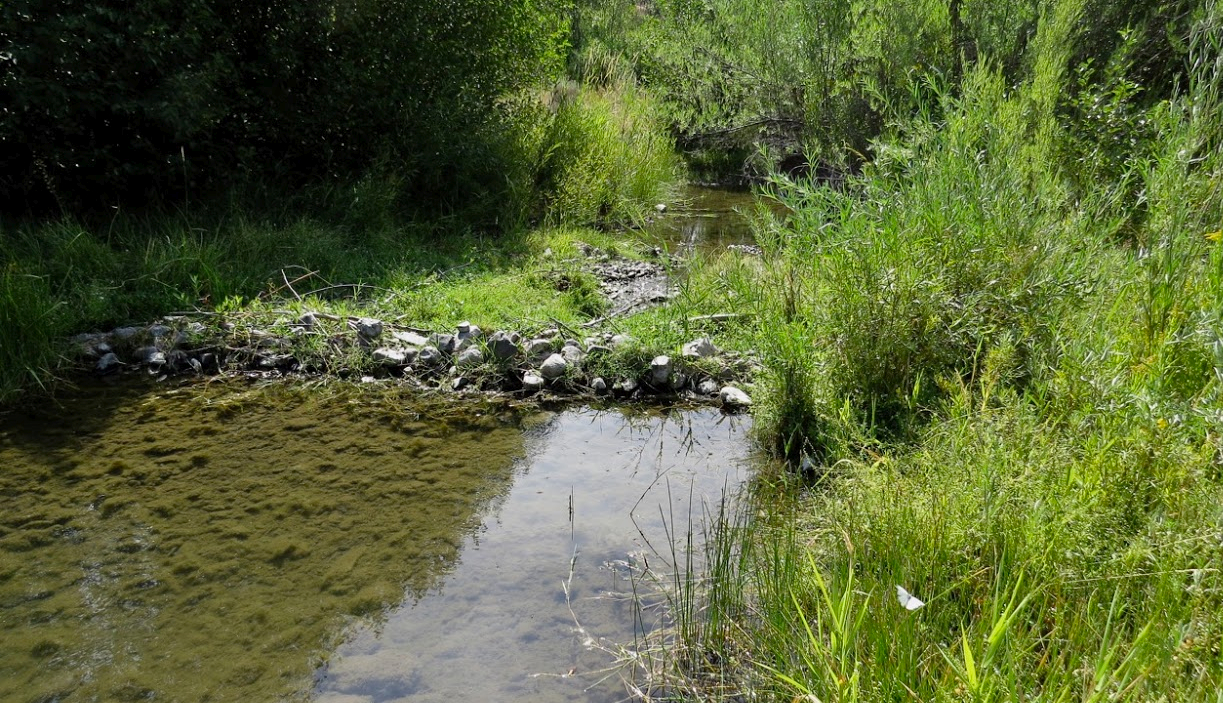 Lots of Life in the Restored Section

As soon as we step onto the restored section, our feet squelch in the wet emerald green grasses and sedges. We feel the instant coolness of shaded waters beneath willows and alders.  A Wilson’s Snipe flies up from the first beaver dam we see. A Columbia spotted frog hops into the shallows, and the first kingfisher rattles past us.

Everywhere we turn is life upon life—darting fish, wrens, warblers, and dragonflies. We breathe in scents of sage, sedge, rushes and mud.  The kingfishers are clearly chasing the fish that Mark lists as speckled dace, chiselmouth chub, bridgelip sucker, sculpin, and red band trout.

The beaver dams stairstep the creek, storing water, recharging the meadows, and forming side channels where more trees flourish. In some places, we see the classic arrangement anglers love to see of a pool, riffle and run. But there’s more. Mark points out that complexity is the ticket for fish, and that in the beaver-created slackwaters you find a diversity of insects and annelids  (worms) that are in turn feeding the fish.

Reese points out that the beavers multiply the benefits of restoration projects. We’re experiencing one of those effects directly. Our shoes are soaked in the soggy meadows by the stream. Beaver dams push the water table out farther from the stream, and then there’s a cascading effect—with more riparian vegetation growing, including more trees for the beavers and more leaves that enter the stream to provide organic matter that’s integral to the food web—from insects to fish to…kingfishers.

“The beavers accelerate the outcomes of stream restoration to return the system to a more natural state,” she says. “They’re keeping water in the stream system throughout the year, too, and that’s benefiting everyone.”

Mark points out that the beavers here had to be extra industrious, because they didn’t have quite enough woody materials and trees initially. They’ve moved rocks into the dams as supplement. Restoration projects that are focused on beaver return might add what’s called Beaver Dam Analogs (BDAs), to help give the beavers a head start.

Still, he’s pleased with how well the beavers are doing on this stretch. We might have sloshed along this recovered beauty of a stream all day, marveling at beaver lodges and dams and wildlife. With some reluctance, we headed back upstream, first passing through a small stretch of the creek that is yet to be restored—clearly illustrating the problems of a downcut, eroded, wide , and almost barren streambed. 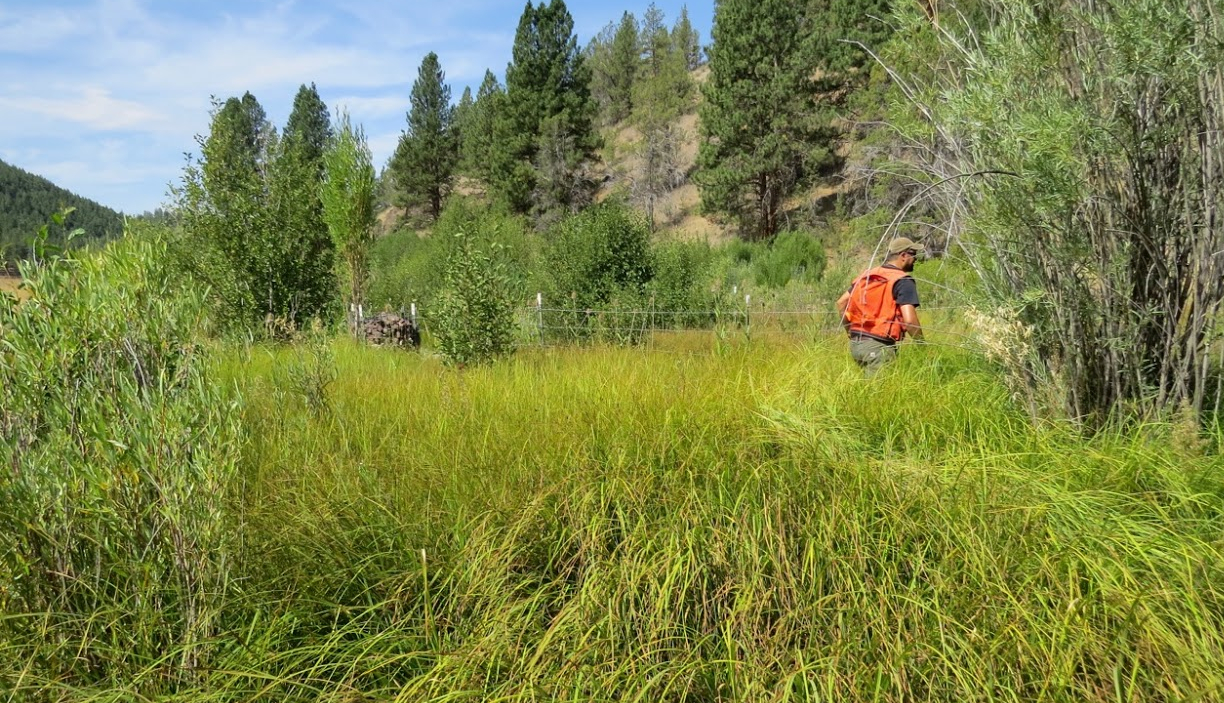 Waist-high grasses and knee-deep mud bogs in August, 2020, along a CRWC restored section of Marks Creek. 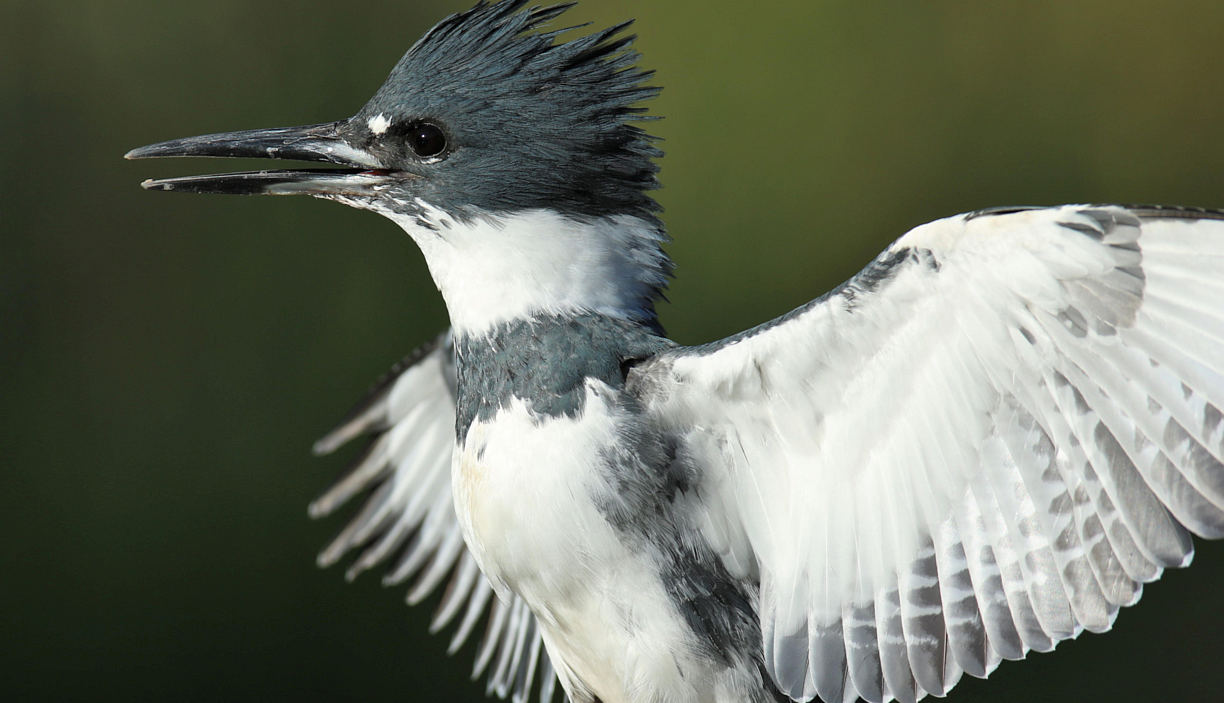 A Belted Kingfisher spreads his wings (Photo by Charles Wheeler)

Back upstream among the energy of the excavating crew, I meet another key member of the team. Jon Kochersberger is the hydrologist for the Ochoco National Forest. He’s right in the thick of things—directing Greg Ontko’s son Kyle who maneuvers the bucket down just the right amount to pick up gravel to create the slope.

Jon is tall and lean with a gray trimmed beard. He wears a red hardhat and carries a tall measuring gauge.  He’s enthusiastic about public-private partnerships to create refuges of water that are as linked as possible in a hotter, drier climate. The aim is resilience.

Working Together for the Future of Water

Working across boundaries makes sense. After all—beavers don’t distinguish one river owner over another. In just a half-mile or so of creek, we’d witnessed the difference between a creek gone dry and a creek running cold and shaded and full of life.  We’ve seen that old practices of straightening the natural winding streams and even “cleaning them up” like tidying a house were misguided. Instead, it’s about embracing nature’s messiness!

Most of the time, restoring streams takes a leap of faith, but here? You can see and hear what nature and beavers can achieve with a little help from landowners, biologists, hydrologists, and contractors—teaming up for the future of our water. 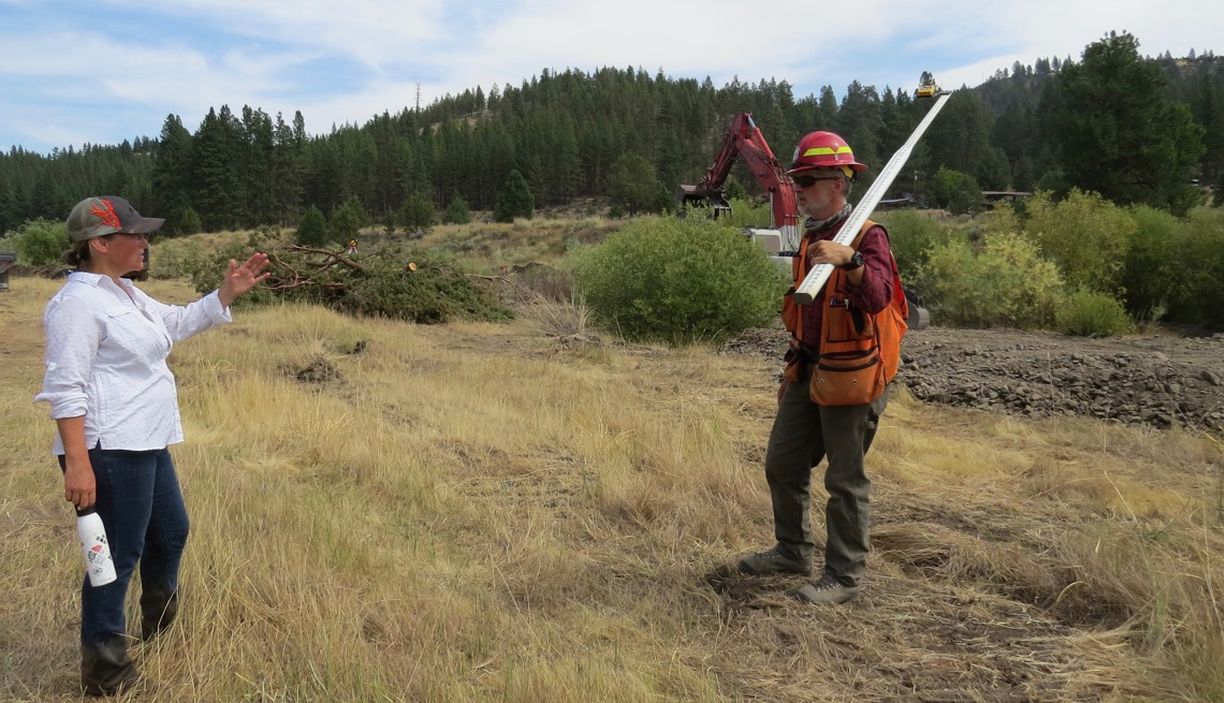 Jon Kochersberger and Reese Mercer discuss the hydrology of the subbasin. 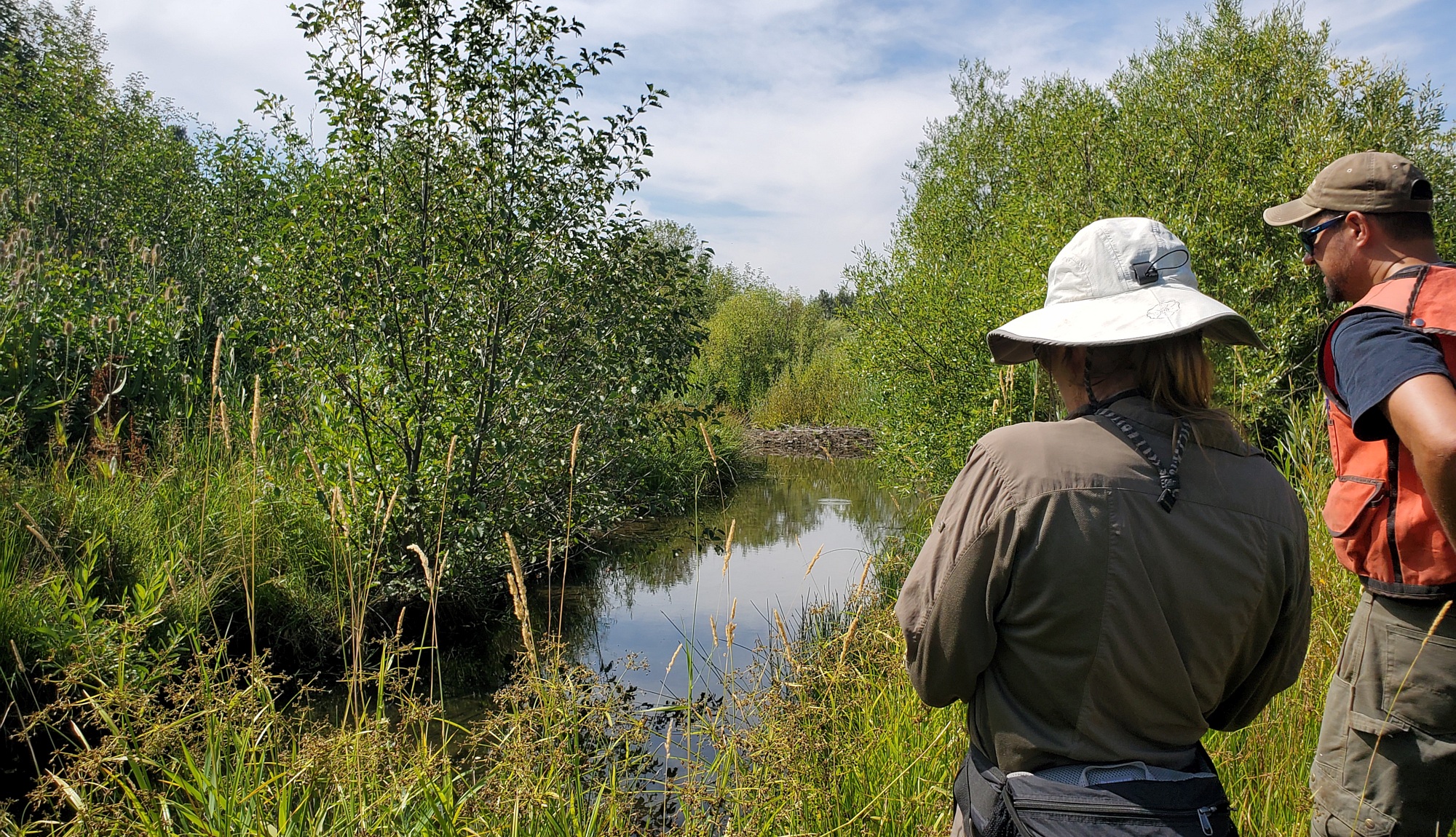 (Our thanks to Crooked River Watershed Council for these photos.) 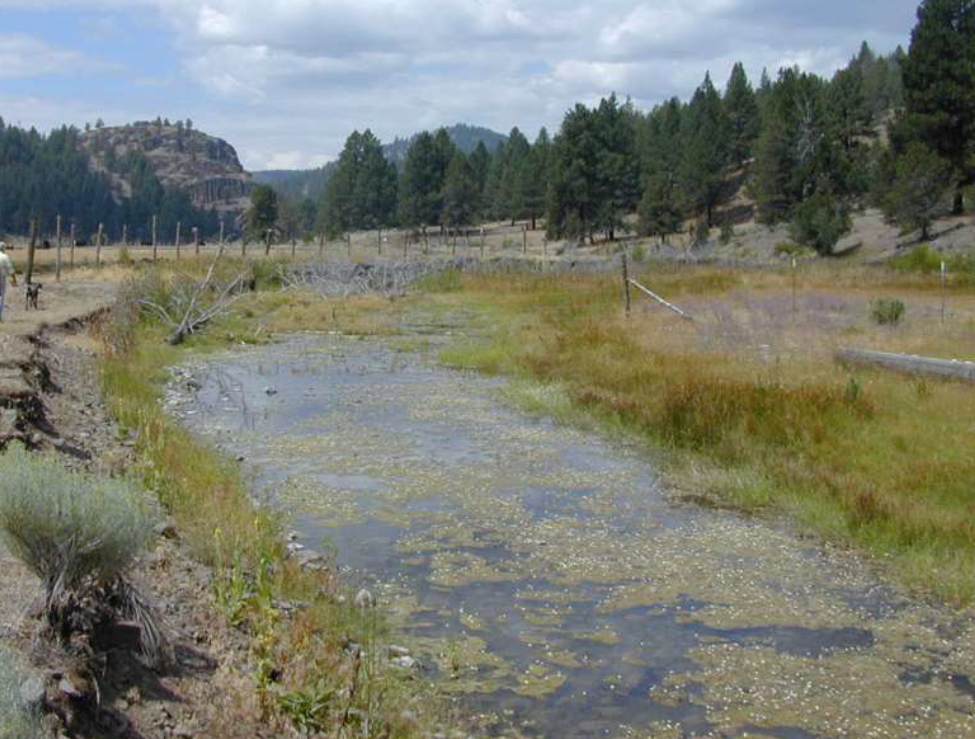 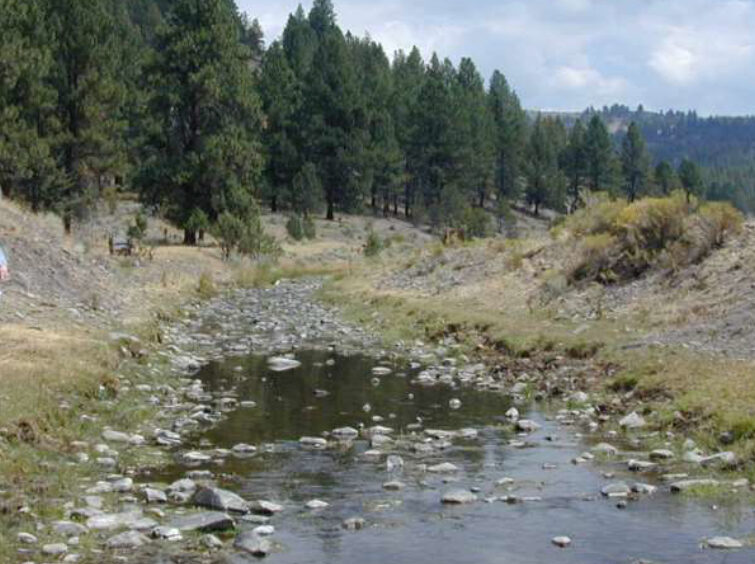 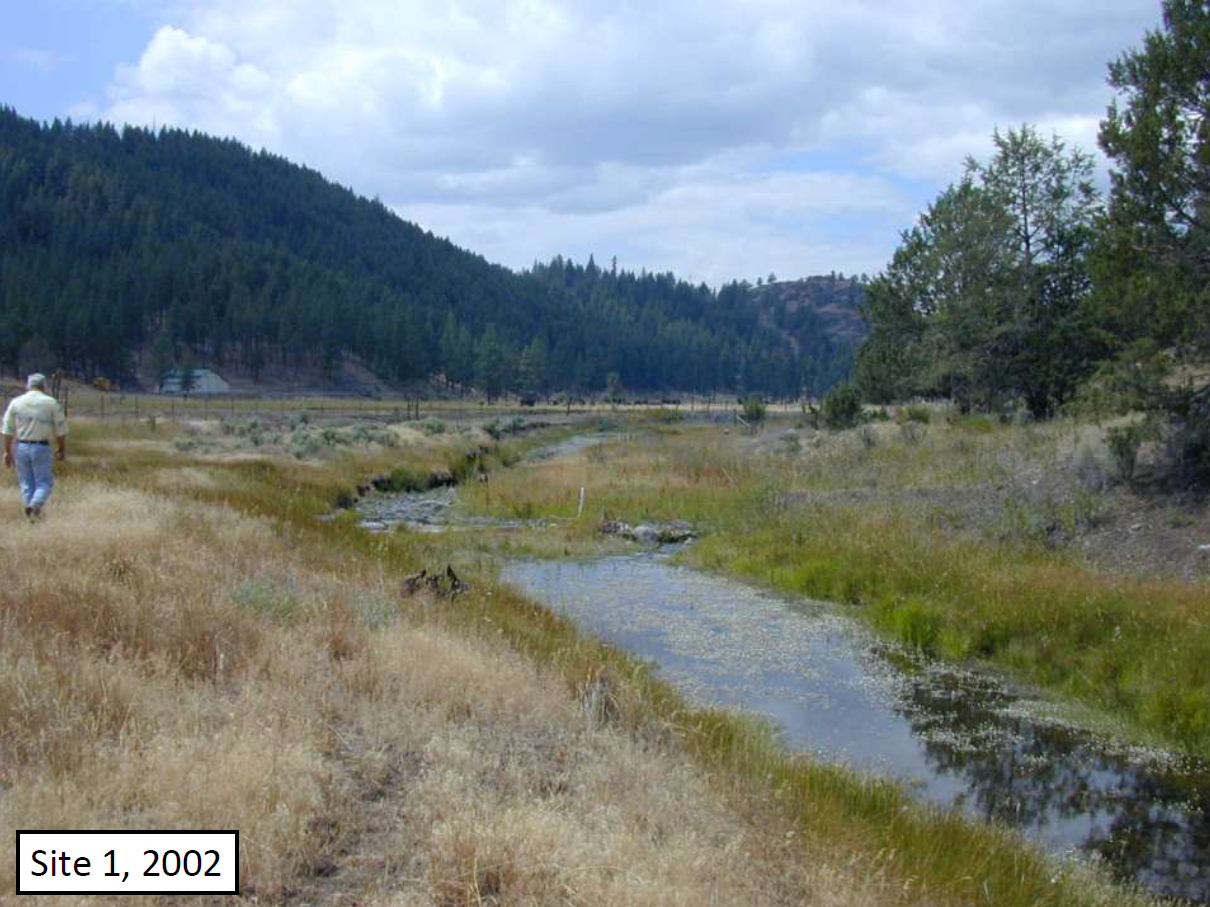 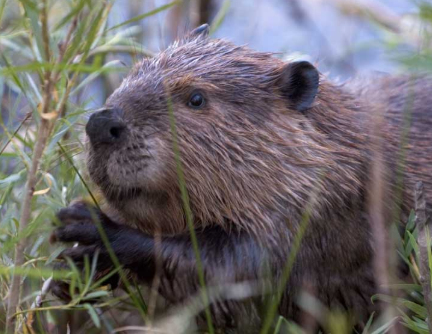 Want to read more about beavers?

6: A Side-by-Side Look at "Restoration" Projects

4: What Are The Beavers Eating Now?

1: The Birds and the Beavers 3 Laws of Ecology

Beavers in Winter, along the Deschutes