Beavers in the American West

It could be said that beavers were the original shapers of the American West. Since early time this semi-aquatic rodent has been shaping the continent through its activities: slowing waters that flowed through steep, narrow valleys while collecting sediment and organic matter, and charging groundwater. In time, this activity transformed landscapes into the wide, beaver stream valleys that  European settlers documented during their travels two centuries ago.

Once numbering in the millions within Oregon, beavers were trapped to near extinction by the Hudson Bay Company and others. In beavers' absence, along with increased human settlement over time, the habitat and wetted valleys that beaver had created and maintained — unraveled. In more recent years beavers, who can maintain up to a half river-mile of high-quality habitat per beaver, have gradually returned to the landscape, but recovery is slow and challenging.

High desert communities and landscapes are struggling with many challenges: increasing fire size and frequency; longer drought conditions decreasing water availability; increasing amounts of invasive species; and a legacy of land management that worked against rather than with nature. The degradation of watershed habitats threatens fish and wildlife, as well as humans who depend on the land. Research suggests a return of Oregon's  original 'landscape shapers" can also return watershed health and resilience.

Beavers though, have largely failed to recover due to a lack of habitat, including: 1) not enough quality food availability, forcing beavers to risk land travel where they’re vulnerable to predation, 2) a lack of large wood structure, making dams less sturdy, less able to sustain large storm events, 3) reduced wetted waterways from extreme drought conditions, and 4) undisturbed stream reaches that are safe to occupy.

What can be done to help beavers recover, so that beavers themselves and everyone else, might again benefit from beavers' activities after being absent for long?

How stream valley floors build up over time from beaver activity 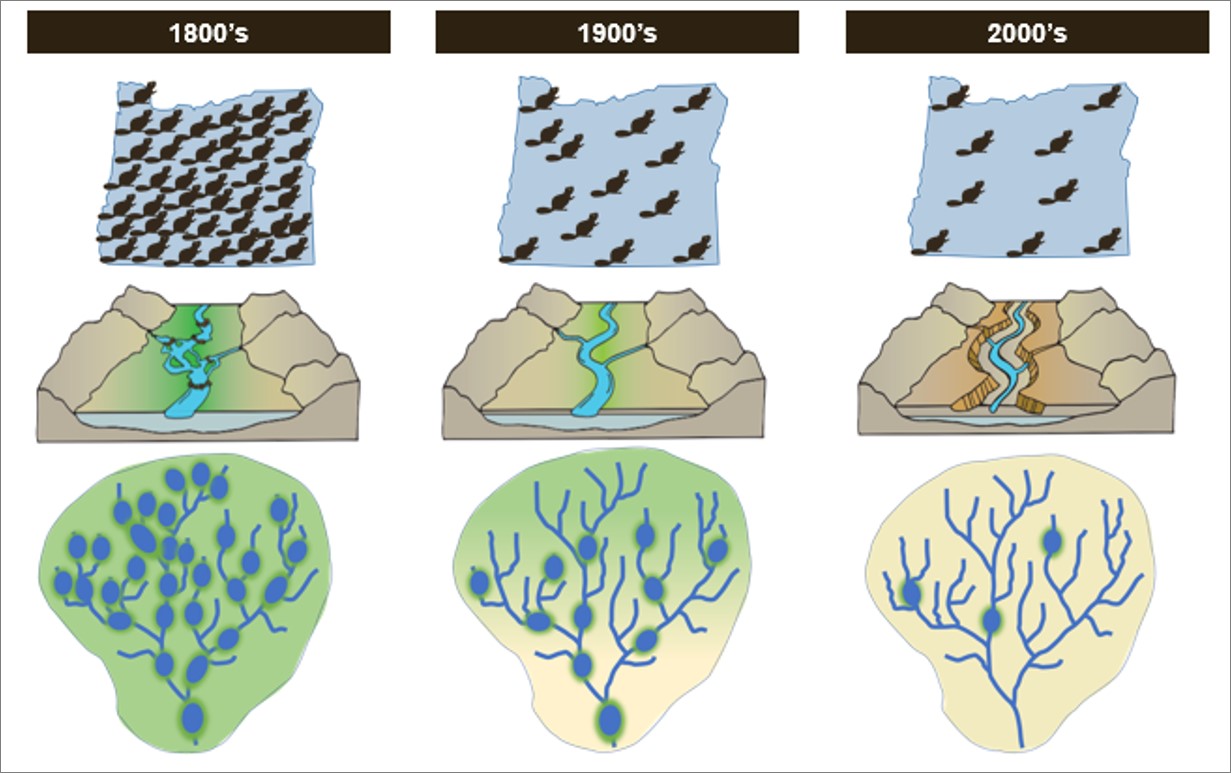 In our efforts to support beavers on Oregon’s high desert landscapes, we have to take a look at the factors that are limiting their restablishment from a “landscape” perspective. Then we can consider the beaver’s own natural behaviors, and their motivations for “sticking around” in a given stream reach.

We first ask ourselves the question - why do beavers often just 'pass through' stream reaches, instead of settling down and sticking around?

Then, through our own monitoring, stream surveys and research — and those published by others — we look deeper from the beaver's perspective:

Why does a beaver (or beaver pair) decide to “settle” in a certain stream and make the area his or her own— a place to invest in dam building and den building with the long-term goal of raising a family?

We believe that just like young human families who seek out a “starter home” in a community with good schools, nearby amenities, welcoming neighbors and jobs to provide for the family, beavers also seek out similar basic conditions in order to settle down and build a family.

Here are some 'beaver basics' in considering where to build their new home base:

In Oregon high desert streams, finding these ideal "let’s settle here and raise a family" conditions is difficult for beavers. 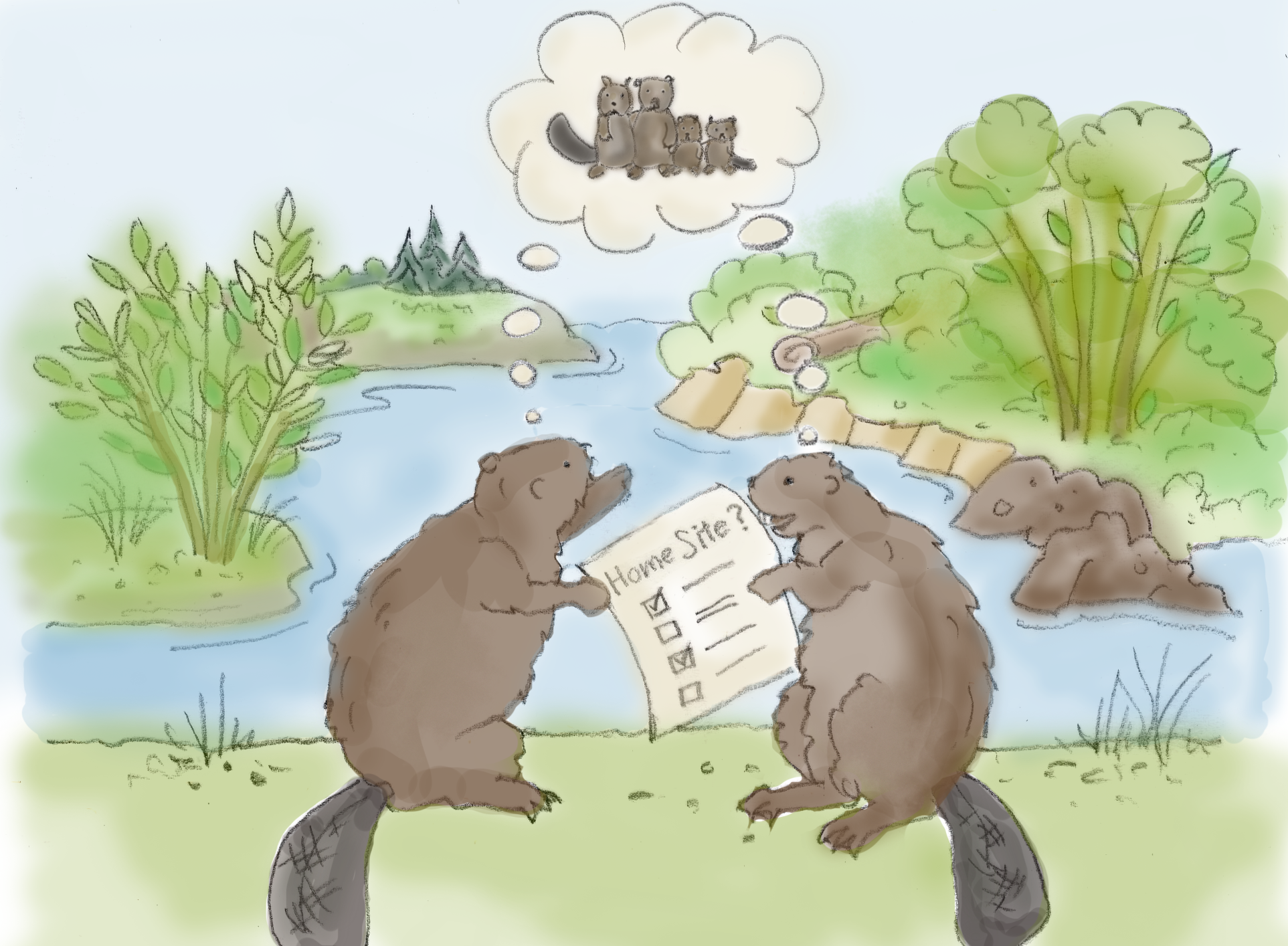 What Do Beavers Need to Succeed?
Although beavers are master engineers, very resourceful and adaptable, the obstacles caused by centuries of unnatural changes to their landscapes are difficult to overcome.

That's why removing the obstacles to beaver success, and addressing the missing conditions that beavers need to do their thing, can help beavers gain a foothold for long term establishment and natural recovery.

Building "BeaverHOODs" can help put us on the path to beaver success.

What’s a BeaverHOOD? We think of BeaverHOODs as a territorial 'home base' area (usually about 1/2 miles in stream length) with the right habitat conditions for a beaver family to establish and thrive.

Beavers can re-establish themselves on the landscape again naturally — without human-assisted 'beaver relocation. In doing so, beaver activity can again bring healthy stream sides, forage and habitat for other species - goals that coincide with our own.

Through 'beaver related restoration' activities - providing conditions that beavers need for success while removing obstacles to their success - we can help to establish these BeaverHOODS.

We believe that thoughtful, incremental and adaptive improvements to the land over time, are key to long-term, large-scale and successful beaver recovery.

This “build it and they will come” approach, puts the beavers' needs first - considering the individual and family's need for safety, security, and food provisions.

We believe that just like young human families who seek out a “starter home” in a community with good schools, nearby amenities, welcoming neighbors and jobs to provide for the family, beavers also seek out basics in order to settle and family-build.

The Conditions of a successful "BeaverHOOD"

Each of these conditions should be present to attract young beavers to settle and stay, family-build, flourish and reproduce for future generations. 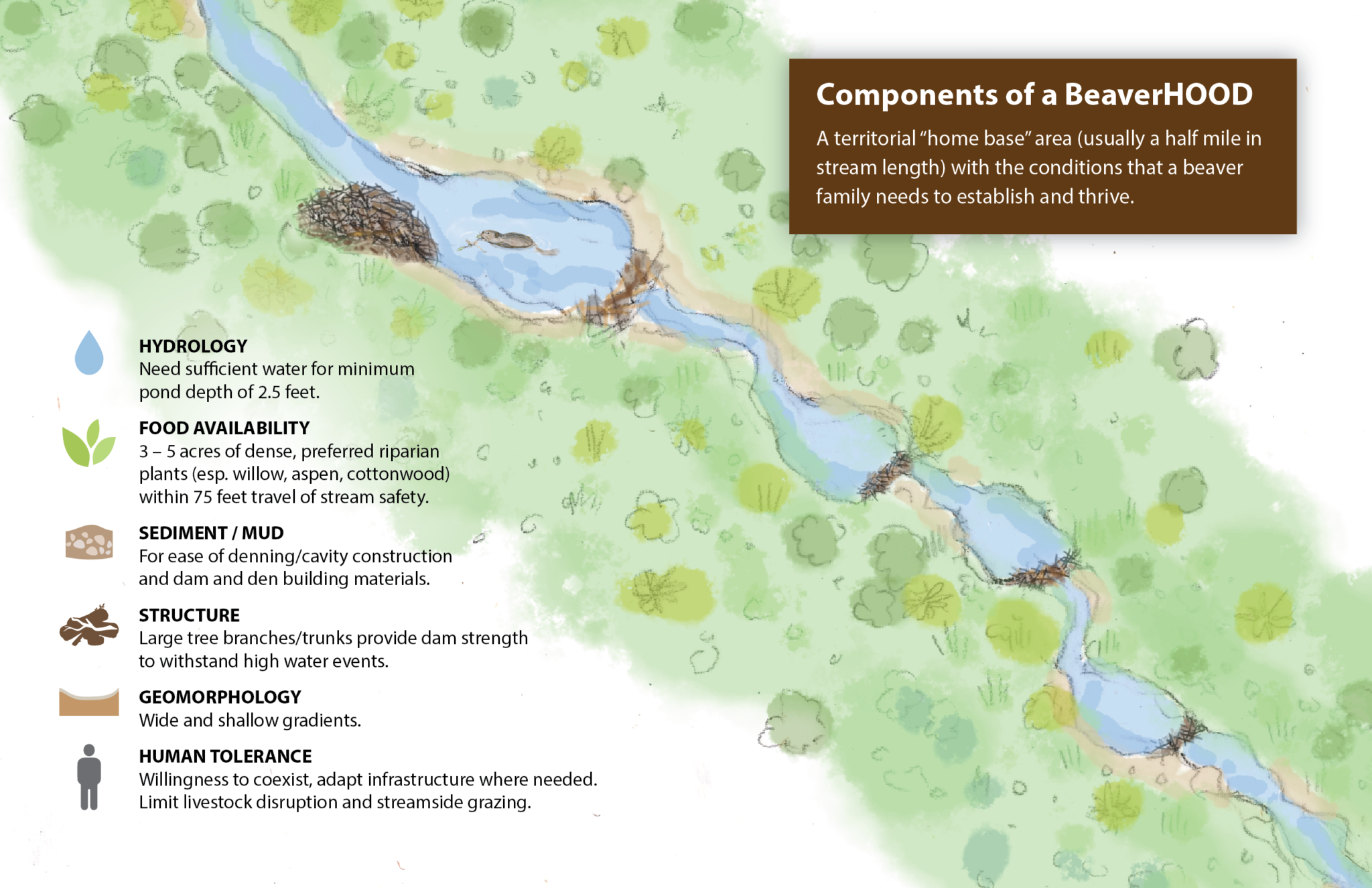 Build it and They Will Come: In a John Day River Tributary

How might this look in real life? Here's a four-mile stream section that drains into the John Day River. It is naturally occupied in some places by beavers, but not in others. Our stream surveys show what's happening along three different sections:

Planting in the blue stream reach includes thousands of native trees, shrubs and bushes. Caging protects the plants from browse until they're well-established.

Building BeaverHOODs through beaver-related restoration doesn't happen overnight, but works at nature's pace through year by year field implementation and monitoring to learn what works, what doesn't and how to make improvements over time. 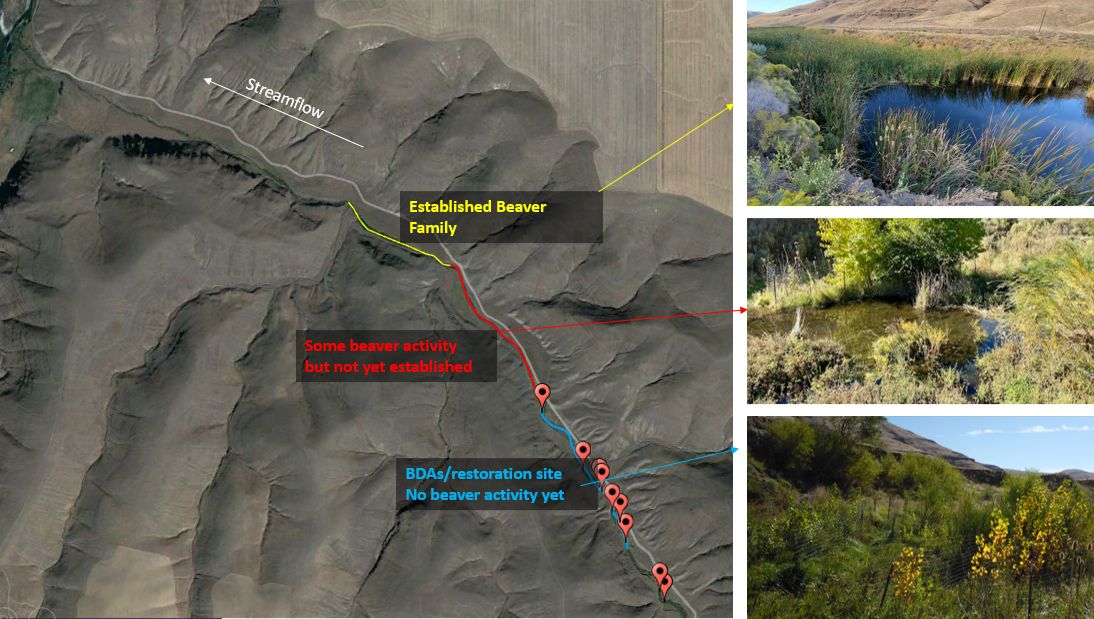 Above: We expect the offspring of downstream beavers to migrate upstream (into red and blue sections) over time as food amounts increase through yearly plantings.

What about Beaver relocation as a way
to accelerate re-establishment?

Could BeaverHOODs be a building block to expand and connect beaver populations throughout high desert watersheds?

We believe so, and picture this: close-connected beaver families, living in safe 1/2 mile 'home base' sections of stream, with enough building materials to do their thing and enough food to expand family generations, year after year.

Building these 'habitat available' home base territories for beavers to regain successful footholds, could improve beaver numbers throughout whole drainages and then through whole watersheds.

It’s a future that could be possible again, in time.

Our thanks goes to Jefferson Jacobs for developing the BeaverHOODs framework. Learn more in this presentation to River Restoration Northwest. 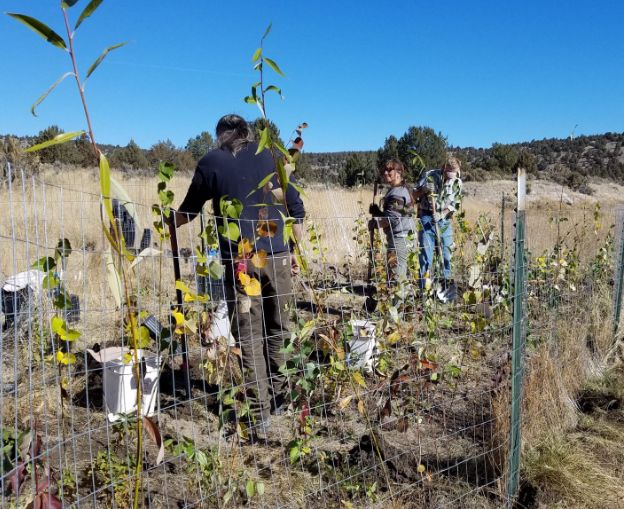 "If the right habitat exists, beavers will likely have already found it. What's lacking to successful beaver expansion, is good habitat."