Throughout Central and Eastern Oregon volunteer opportunities abound to enhance beaver habitat and (ultimately) beaver success on the landscape working with local area agencies and nonprofits to kickstart the conditions needed for beaver to be successful. Whether you're looking for a short day trip close to home, or a longer 2-4 day trip where you can really dig into the dirt, there's much work to be done and hands-on, hard-working volunteers can really help make a difference! 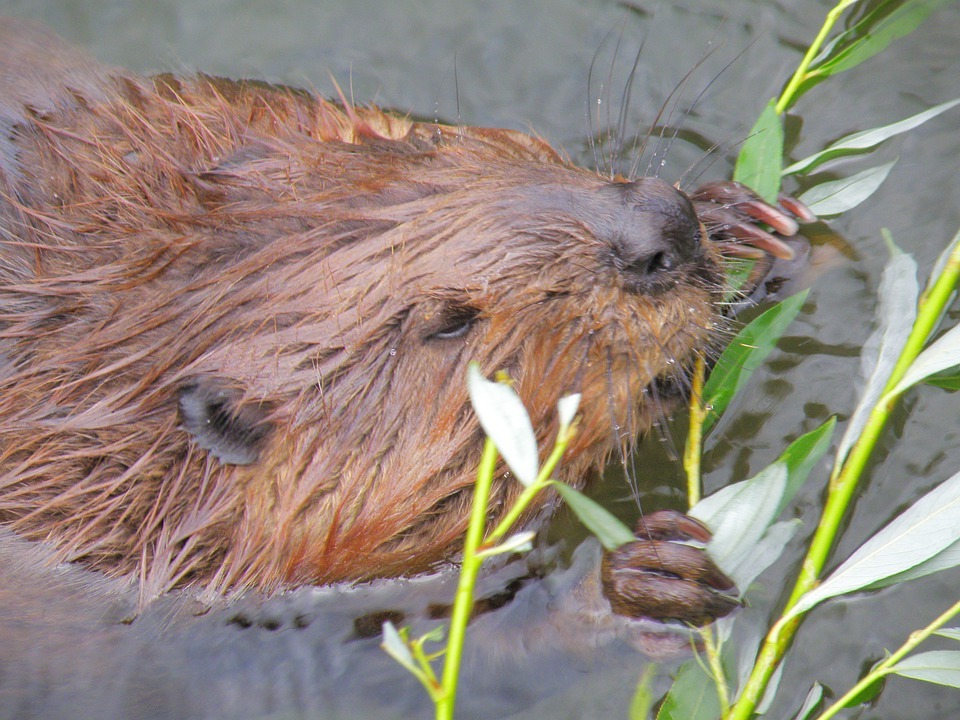 Beavers are strict vegetarians. Beavers tend to build their homes alongside rivers and the edges of other bodies of water, within close proximity to trees. But beavers do not simply eat just any tree they come upon. The beaver diet includes certain varieties for eating, and others for building their dams and lodges. Also, the beaver diet depends on the season. In the spring and autumn, they will eat both woody and soft flora. In the summer, most of the vegetation they eat will be soft. In winter, when there is little new growth on plants, beavers eat woody fare. Beavers have unique micro-organisms in their guts that help them digest as much as 30 percent of the cellulose they eat from plants.

Trees that make up the beaver diet include bark from willow, cottonwood, aspen, poplar, maple, birch, oak, alder, black cherry and apple trees. Beavers will gnaw on trees until they fall, and then they clip branches from the resulting logs and add them to their food stash. While beavers will sometimes eat fir, pine and other conifers, they do not favor them for food. They will often use such trees for dam building, however, or fell them to allow their favorite foods to grow instead. You can spot areas of beaver lumbering where there are sharply pointed tree trunks, with grooves from their teeth marks, as well as piles of wood shaving around the trunks. Beavers can fell as many as 300 trees in a year!

Beavers can store their food in a fascinating way for winter, when they are not able to access as many delicious plants. They make a muddy floor inside their lodge homes, and push sticks and branches into the mud so it will stay there and be refrigerated by the water’s cold temperature outside the lodge. This amazing food stash is called a cache and tends to be made and used in colder climates. Beavers stay busy in the fall gathering food for their cold winter and upcoming times when food is less available.

When beavers eat, they hold their food in their front legs much as people hold corn-on-the-cob, rotating the treats as they go.

Baby beavers are called kits, and they nurse from the milk of their mothers. Sometimes these kits even stand up to nurse. After about six weeks, these kits will be old enough to eat solid beaver food, which every family member helps to bring them. Young beavers will stay with their families until they reach around two years old.

Generally, beavers eat their food close to water and their lodges or dens. If the beaver food supply in an area becomes depleted, they will eventually move. This may take several years to happen, though.

For homeowners concerned about beavers intruding on their properties and eating their plants, fencing can be made to prevent this. Also planting trees that beavers do not like eating, as a sort of natural fence, may be a good idea.

There's a lot of talk lately on how beavers can fix streams and the need for 'beaver reintroduction'. Many streams though are very broken, worsened by drought, without the conditions beavers need to settle and raise families. So we ask, in order for beavers to re-establish: What is it that beavers need to succeed, and how can we help them? BeaverHOODs provides an answer.

Interested to Learn More and Get Involved with this project as it builds?